Yep! It’s World Breastfeeding Week! At Enlightened Mama, we have three goals to help you THRIVE in your journey of breastfeeding…
1. Feed your baby.
2. Feel sane.
3. Enjoy your baby.
Sometimes, in order to meet these goals, a family needs to discontinue breastfeeding, either partially or completely. This doesn’t mean that you failed, that you weren’t enough, that you didn’t try hard enough, or that you have ruined your bonding relationship with your child. It means that you have succeeded in choosing to provide nourishment for your baby to grow and be healthy. It means that you chose to feel emotionally healthy, which is the greatest gift you can give your child. It means that you realized that babies grow up fast, and it’s more important to spend as much time with them as possible, and less time with a breast pump, nipple shield, SNS, tube, syringe, or any other device that just isn’t as sweet or snuggly as your child.
And if you need even more inspiration, check out this amazing story from a few years back, by one of our Enlightened Mamas, Kate Spiegel Sinakhone, who proves that sanity definitely beats breastfeeding… 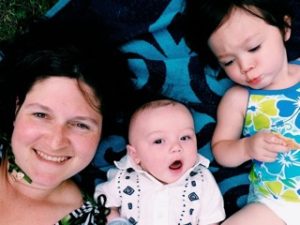